As things start to cool down and with rain in the forecast, hardcore walleye anglers are hoping the fall greenback run will start. There have been a few good catches reported but some increased water flow would go a long way to trigger a fall run.

Many are still venturing out into Lake Winnipeg with some big fish being caught. The walleye have moved a bit shallower with the cooling water temperatures. They were in the 23 foot range but now lots of fish are being found in 12-14 feet. John Klassen caught this beauty last week. 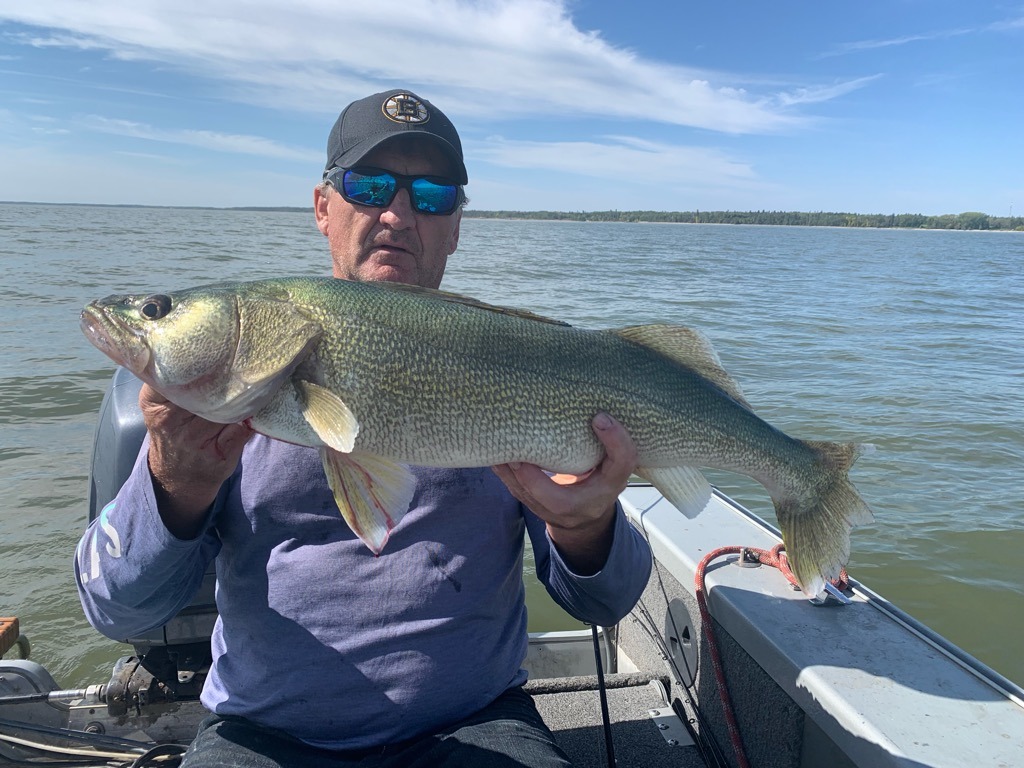 Out in the western part of the province, Lake of the Prairies is still producing some good walleye fishing along with some massive northern pike. Check out this 44.5 inch beauty from Thomas Dunn 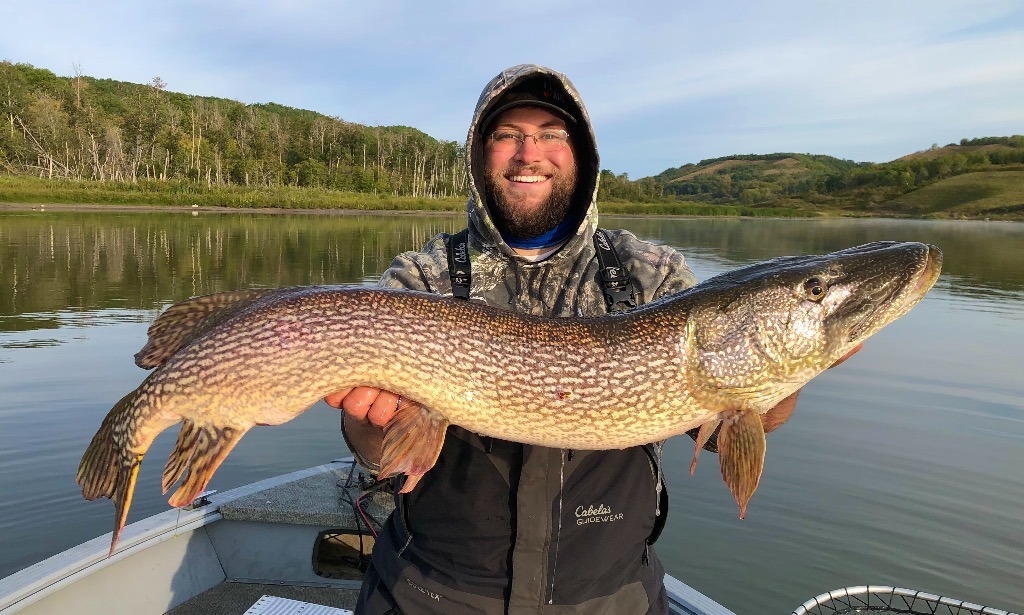 In the central part of Manitoba the Fairford River continues to be a hotspot for massive freshwater drum! Check out this monster caught from shore by Brenda Vandenberge. 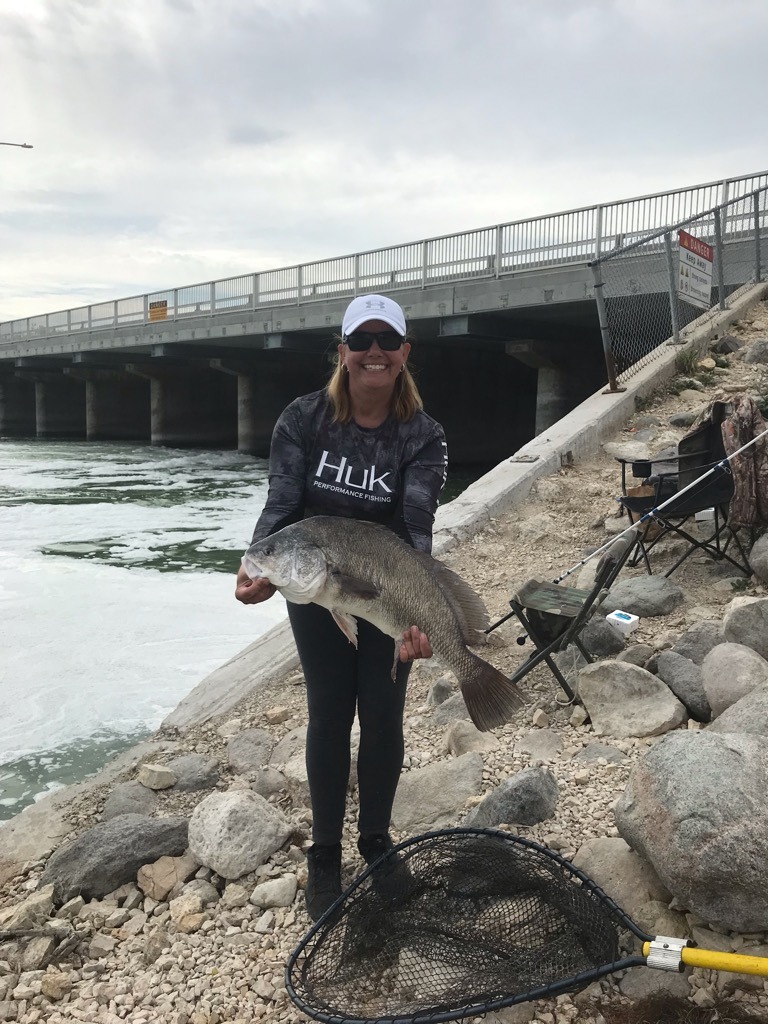 This fish measured out at an impressive 28 inches. Worms are the ticket right now.

Lake trout are starting to think about moving shallow for the late fall spawn and the walleye are scattering a bit and moving a bit deeper in the 25 foot range. 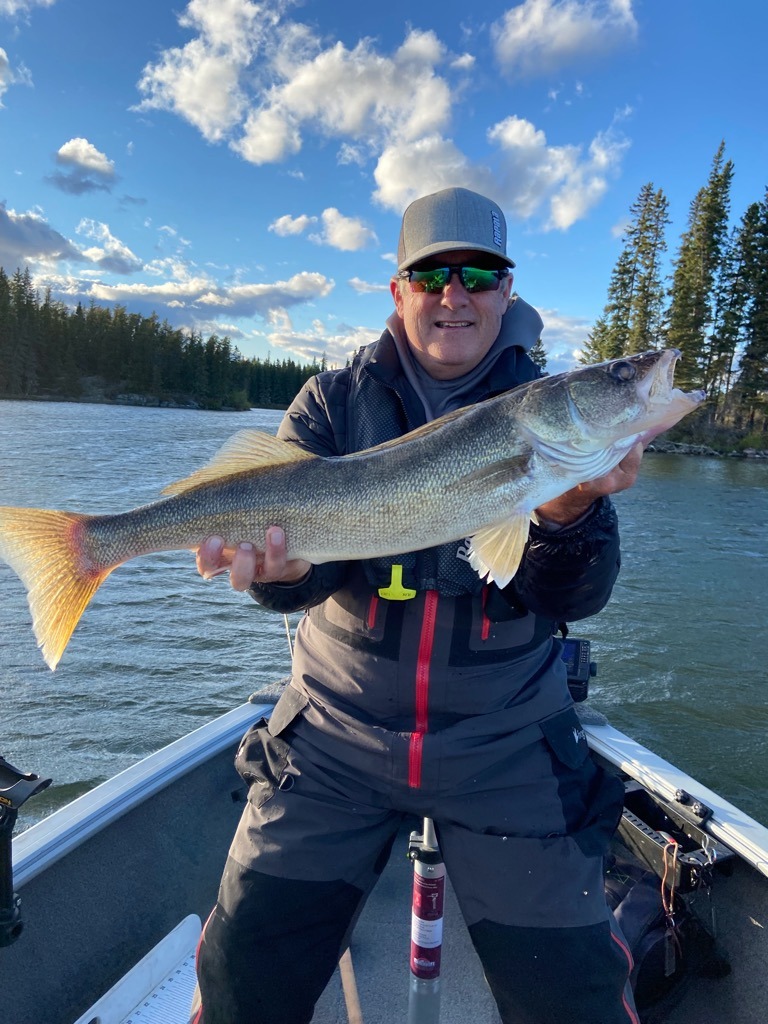 Clayton Schick was up north there on filming trip recently, staying at Bakers Narrows Lodge. He decided to head out on Lake Athapapaskow with guide Mac Mulligan.

The cool nights of fall are finally upon us in Northwestern Ontario. With it, the water temps are starting to cool to the low 60’s. Some lakes have turned over and others are set up with a distinct thermocline.

Fishing has remained great throughout the region. Lodge owners are reporting better than average fishing for walleye. The musky bite has been a little bit tough with consistent patterns hard to find.

I spent a couple days fishing with Matt and Ron Abel, and was fortunate to get them out on famous Eagle Lake. We spent the day on Eagle Lake dodging storm systems and heavy winds. Not finding active fish on rock structure we focused on shallow weeds. We were rewarded with multiple follows and a couple hits. Moving across a weed saddle from one Island to another I cast a Lumox Lures Scallywag just off the deep break line of the weed edge. As my bait moved close to the boat a giant musky came up and barrel rolled through my bait! Fish on! As she slid into the net she did one more alligator roll and busted the tip off my rod at the same time. All caught on video! Be sure to check out my youtube, just search 54 or Bust! 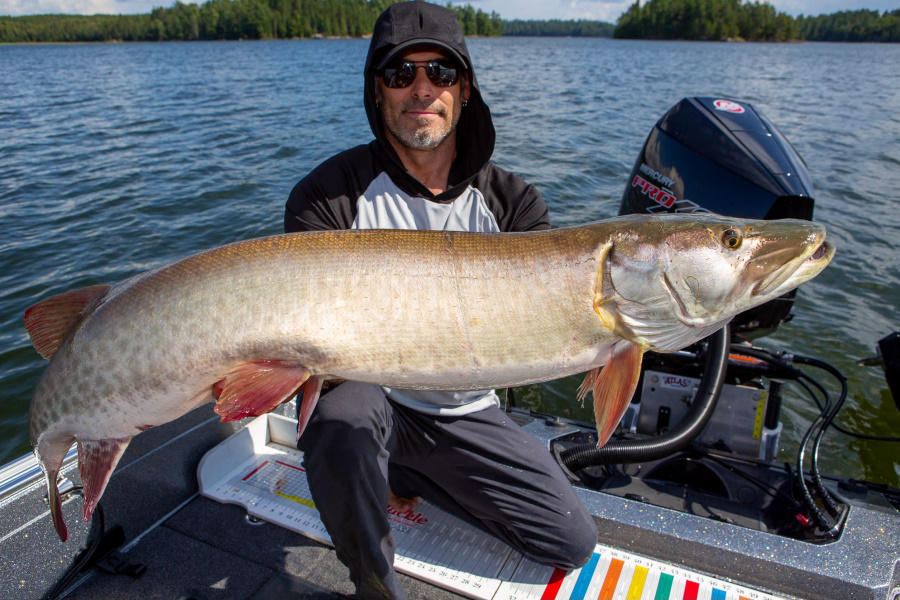 Not my biggest of the year but one of the thickest fish I’ve held in a long time!

Shortly after that we had a quick visit with my brother in law, who owns a cabin on Eagle Lake. He suggested an area close by that we should check out. Moving into that area I seen a mark on the Garmin Livescope that looked like a musky. A split second later my buddy Matt was hooked into his first Eagle Lake musky! Not a huge fish but the picture is worth a thousand words and then some.  Already a highlight of the year for me! 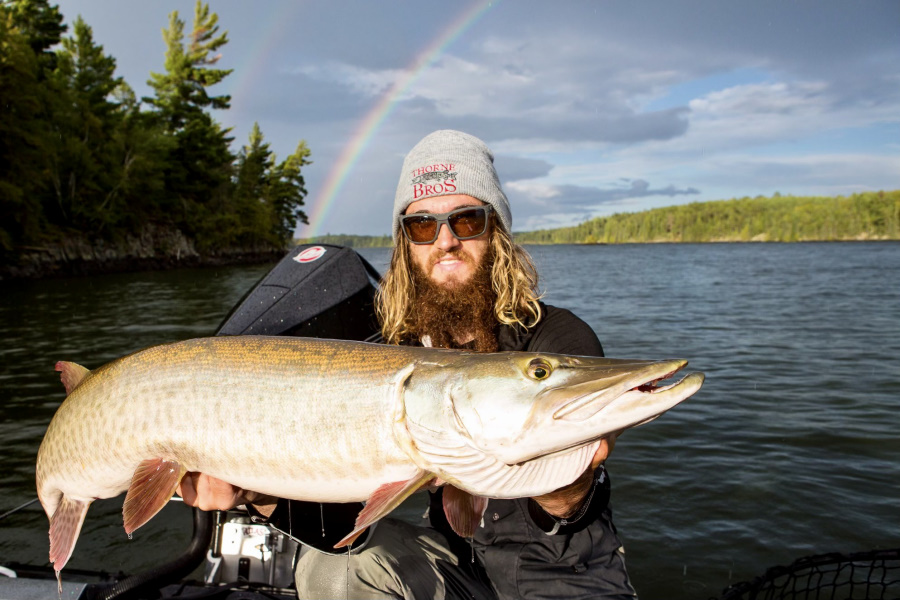 Over the same weekend Craig Larson from Vermilion Bay was fishing on Eagle Lake and hooked into a beauty of a fish. This time the tactic was trolling.  A nice thick fish with beautiful markings. Craig is keeping his good luck on Eagle Lake going into the fall! Keep an eye for Craig, as he is pro staff for Manitoba’s Fishin Co! Definitely more to come from Craig this fall! 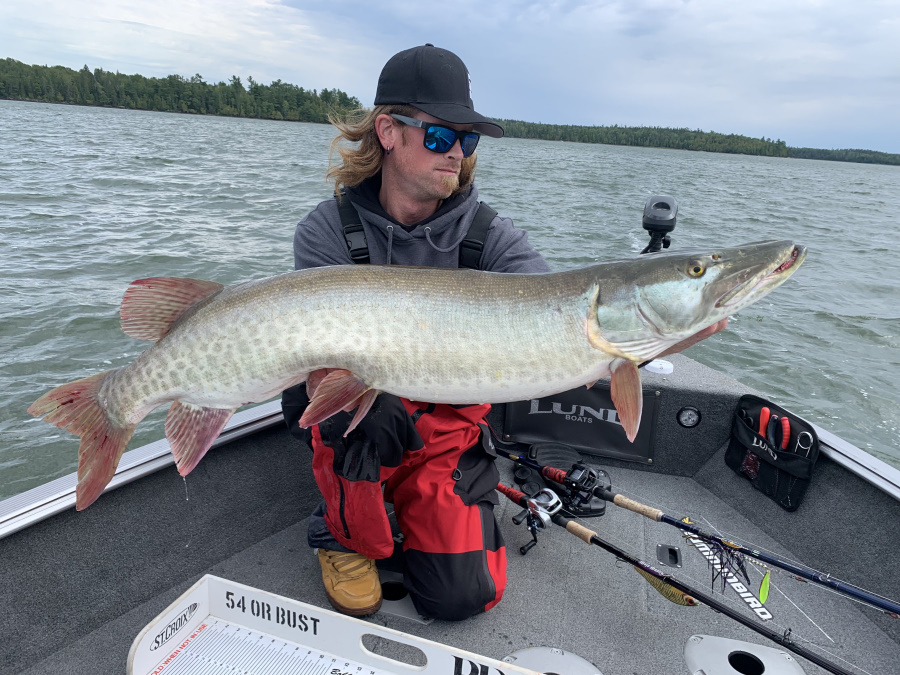 Speaking of trolling, Dave Chaval and I were out over the weekend and when the casting bite failed to produce any thing we changed our tactics. Trolling some Supernatural Mattlock baits we salvaged the night with two fish in the bag! Coming on back to back passes we knew we had hit on a hot bite but the evening was upon us.

The mid part of September will see a big change in the lakes. Water temps will start to drop and fish will look for the warmest water available. South facing bays, or weed lines will hold bait fish and the predators won’t be far behind. 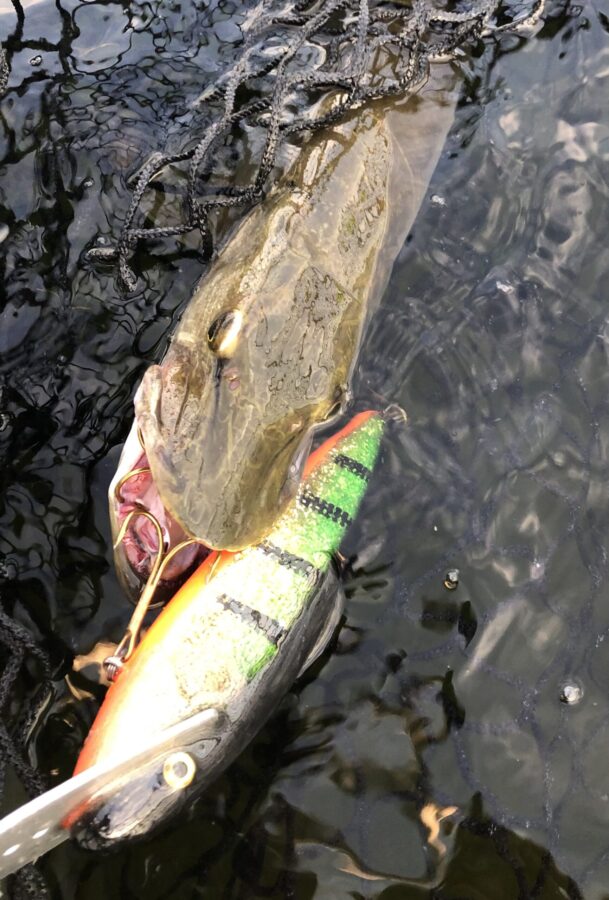 The next couple weeks should set us musky anglers up for the beginning of the fall live bait season. Exciting times for musky anglers.

Look to the fall issue of Hooked magazine for my article on last October’s hunt for the elusive Eagle Lake Blonde musky!

Good luck out there anglers!

September brings some of the best fishing Last Mountain has to offer. The fish are feeding hard to get ready for the winter.
September also means the Last Mountain Fall Walleye Classic. It definitely did not disappoint the 161 teams (322) tournament anglers. Pre fish seemed to be a bit slow but come tournament weekend the bite came through with a new record total weight breaking 60 pounds for the first time in 34 years. 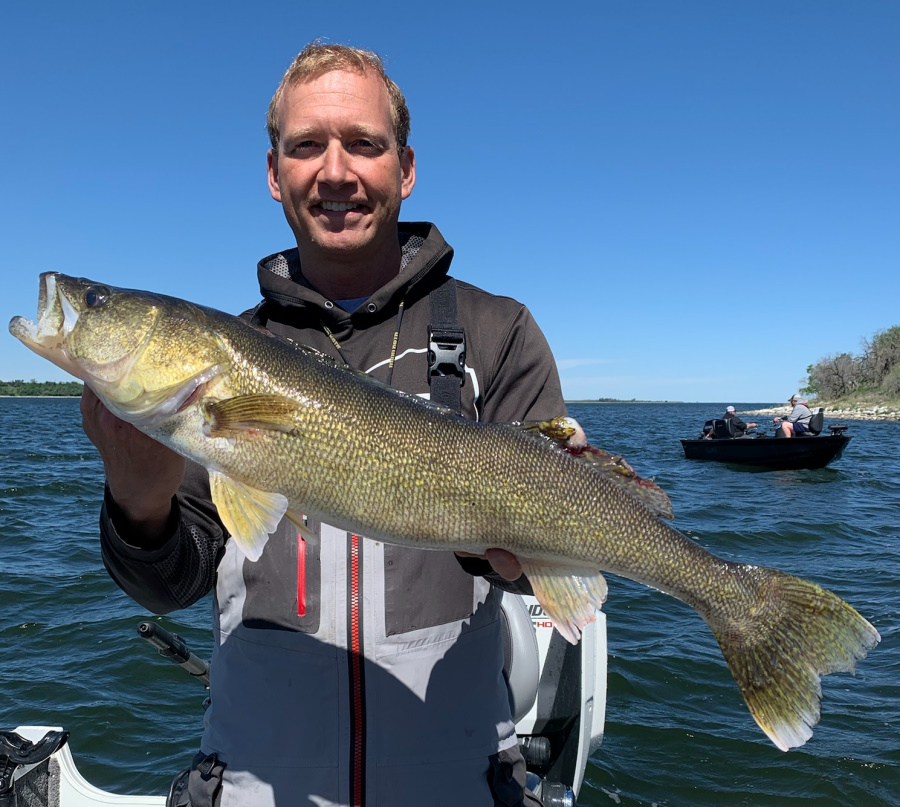 THE BITE IS CHANGING
With the colder nights the water temperatures have cooler to 61 degrees F. The Walleye are still in some of their regular summer locations and patterns but these cooling water temperatures and windy days have triggered a lot more shallow feeding frenzies. They are now also starting to move onto the sand points. The Walleye are also still on the steep brake lines of Last Mountain’s main lake basin but when the wind blows there has been a number of good catches now in 5’ to 10’ of water. All sizes of walleye are being caught from 12” up to the giant 32” trophies. For Walleye all the fishing techniques are still working well. Bottom bouncer and crawler harnesses, crank baits, jigging spoons, jigging and live bait rigging. 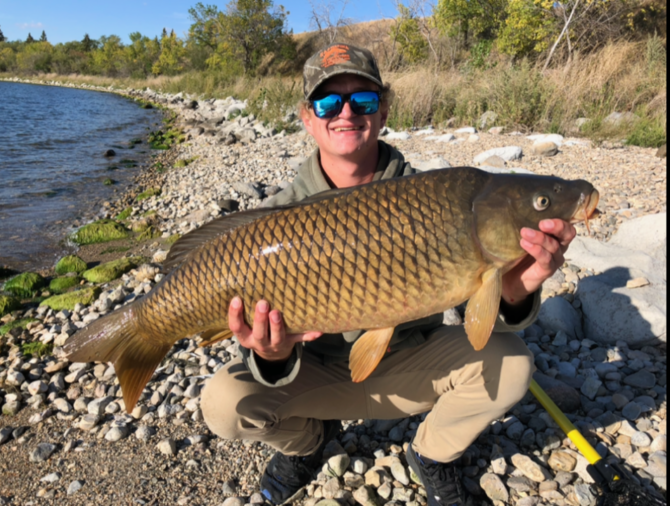 The Carp are still feeding well with some good catchers of fish ranging from 15 pounds to 34 pounds. The secret to a good Carp fishing day is the work that goes into the pre-baiting of the area you plan to fish for Carp.
The Northern Pike have now moving shallower to depths from 4’ to 15’. Trolling mid to shallow crank baits, tossing swim baits and spoons along the weed beds is working very well for the Northern’s as well as the Walleye.
There are good numbers of Perch still being caught off the steep breaks with small jigs and minnows or a piece of crawler and also they are hitting the crawler harnesses while fishing for Walleye. Your electronics are critical now that the fish are in varying water depths. Your depth finder is your under water eyes so watch for what depth you are marking fish then work that depth.
Remember never fish deeper than 30’ so you don’t kill those Walleye as they cannot withstand the trauma of coming out of deeper than 30’ depths.
Good luck fishing and remember to release those trophy fish!! 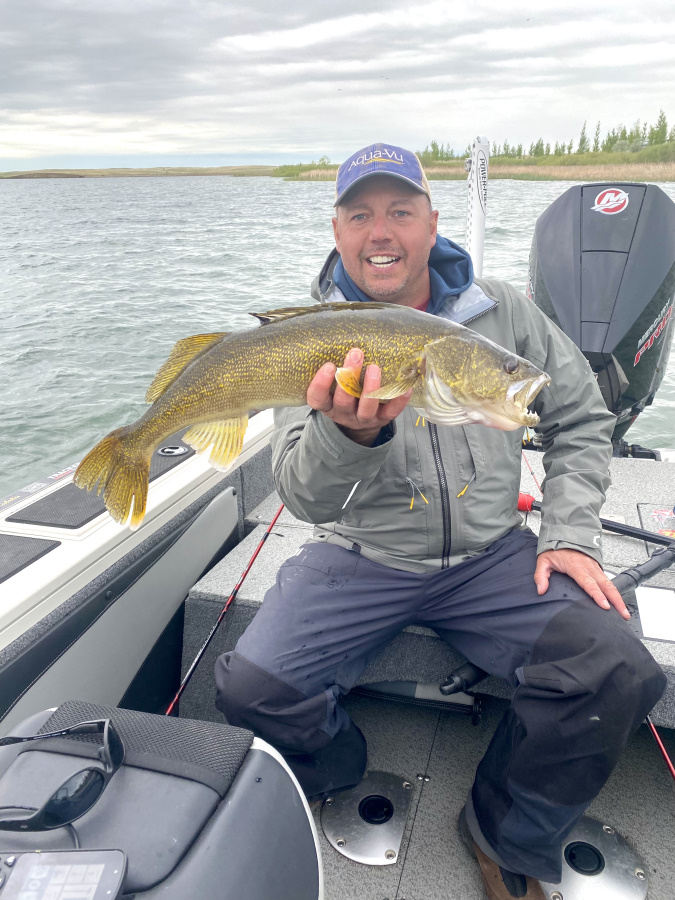 September is one of my favorite times of the year to fish. Why? The kids are back in school, the summer vacation season is all but finished, and waterfowl and archery hunting is underway. That means Alberta’s lakes and reservoirs have an abundance of room for hard-core anglers wanting to fish the start of the Fall Turnover. September and well into freeze-up in my opinion, is one of the best times to be on the water. In mid-September, many freshwater fish species are beginning to transition from their summer locations and feeding patterns, into their fall feeding patterns and locations. At this time of the year, along with catching quantity of fish, anglers will often catch some of the largest fish of the season as fish begin to bulk of for the tougher living conditions that lay ahead. 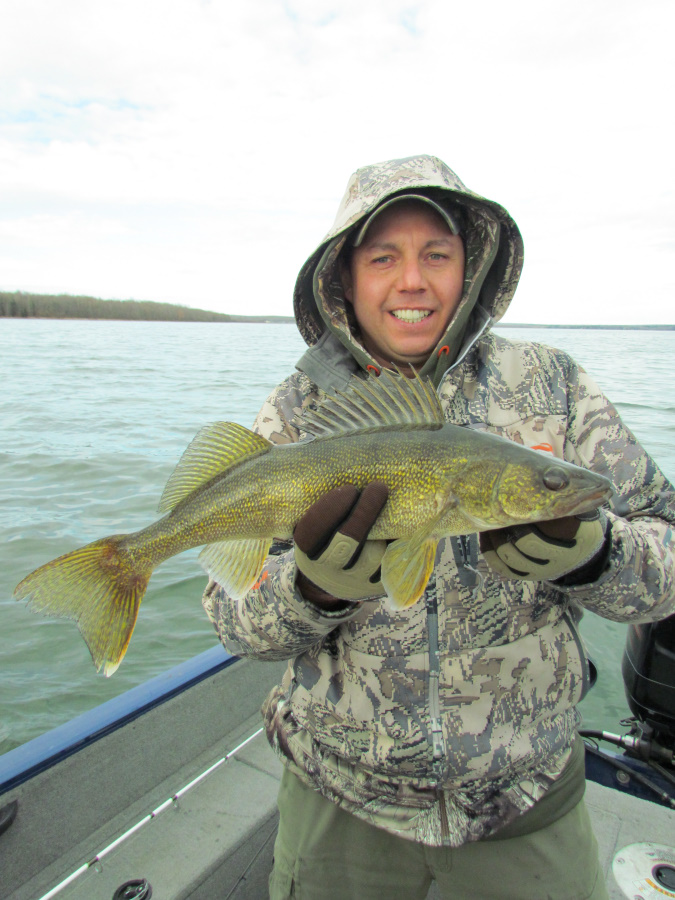 Historically, I have found walleye to be in an aggressive feeding pattern more often during September, especially, from mid-September through to the end of October, than any other time of the year. And, if you can’t decide between hunting and fishing, try a cast and blast. I can’t count the number of times I’ve had hunting and fishing success on the same day during the month of September. 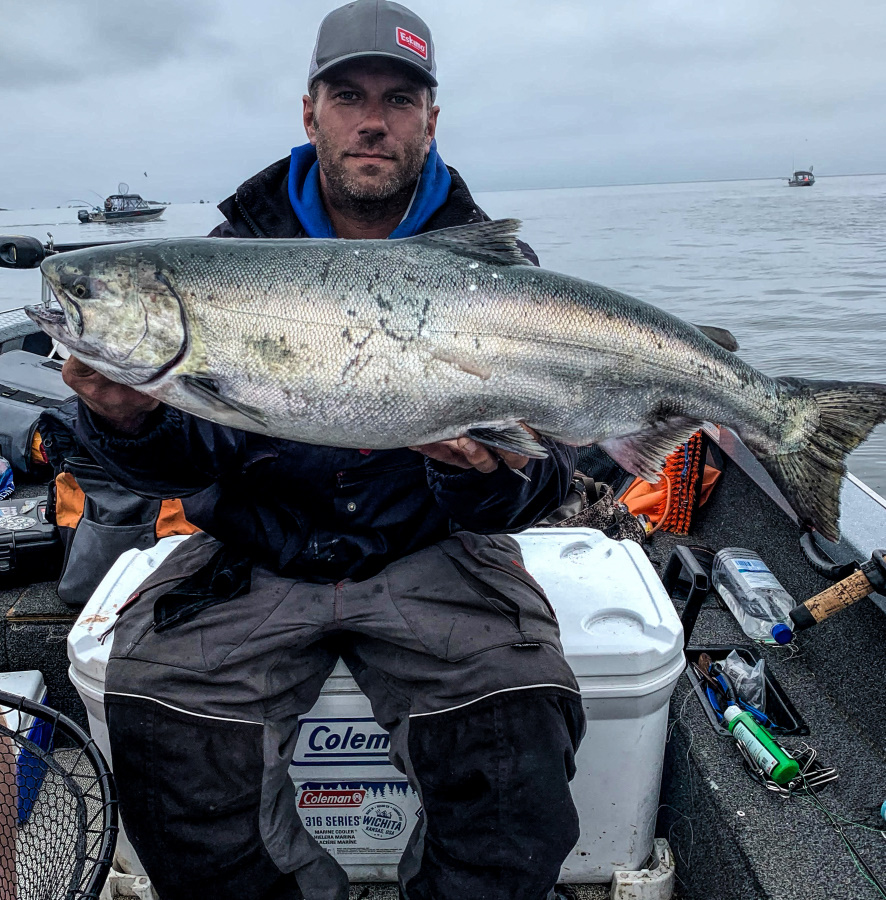 Although I usually spend my falls chasing giant walleye until the ice tells me I can’t
take the boat out anymore this year things are different. We will be chasing the
Salmon hard for the rest of the year . Plan to go after halibut and other bottom fish.
Winter smallmouth and largemouth ! And as always crabbing and prawning. Also to
will soon have all my Charter Certifications by mid October to be a licensed guide.
I will use all the same media pages and start a new website. Hit me up on anyone
of these if your ever on the island . Tight lines my friends hope you all have a great
Fall fishing it’s the best time to be on the water.

Fly Fishing is enjoying new found popularity, especially among those willing to explore. More and more hardcore anglers are searching for the ultimate bite. In Manitoba we have some of the best fly fishing opportunities in the Northern Hemisphere. While they are not your standard trout streams, still water fly fishing is the king. For 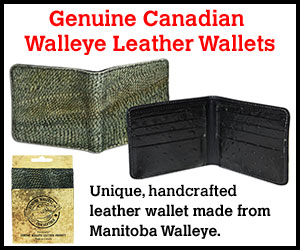