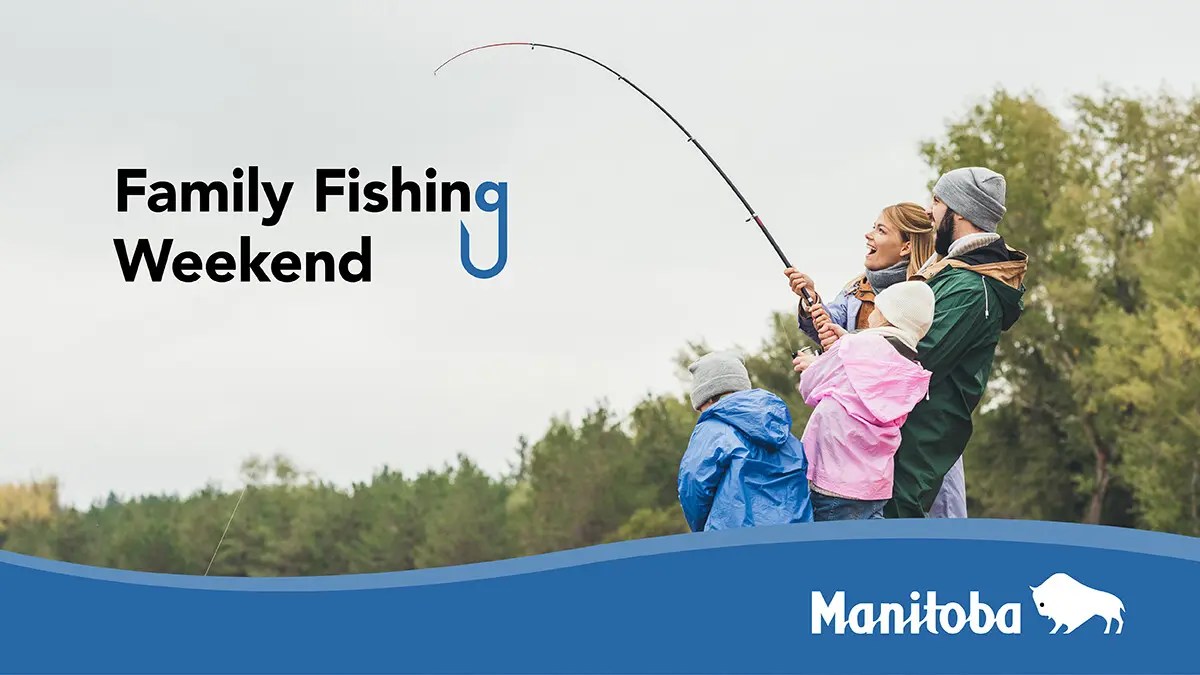 “Although this year has been difficult for Manitobans, our government is continuing a summer tradition by making recreational fishing free of charge this weekend of June 12th and 13th. I encourage all Manitobans to explore MB’s abundant fisheries and parks.”
This announcement by Blaine Pederson, Minister of Agriculture and Resource Management.

BY MATT GELLEY
The spring Crappie bite this year has been challenging to say the least. Once the water temps hit 65F, schools of crappies usually invade the spawning bays. This year, however, something strange is happening. It has been a very staggered spawn. We have still managed to catch a few on the bobbers but, it has been tricky. 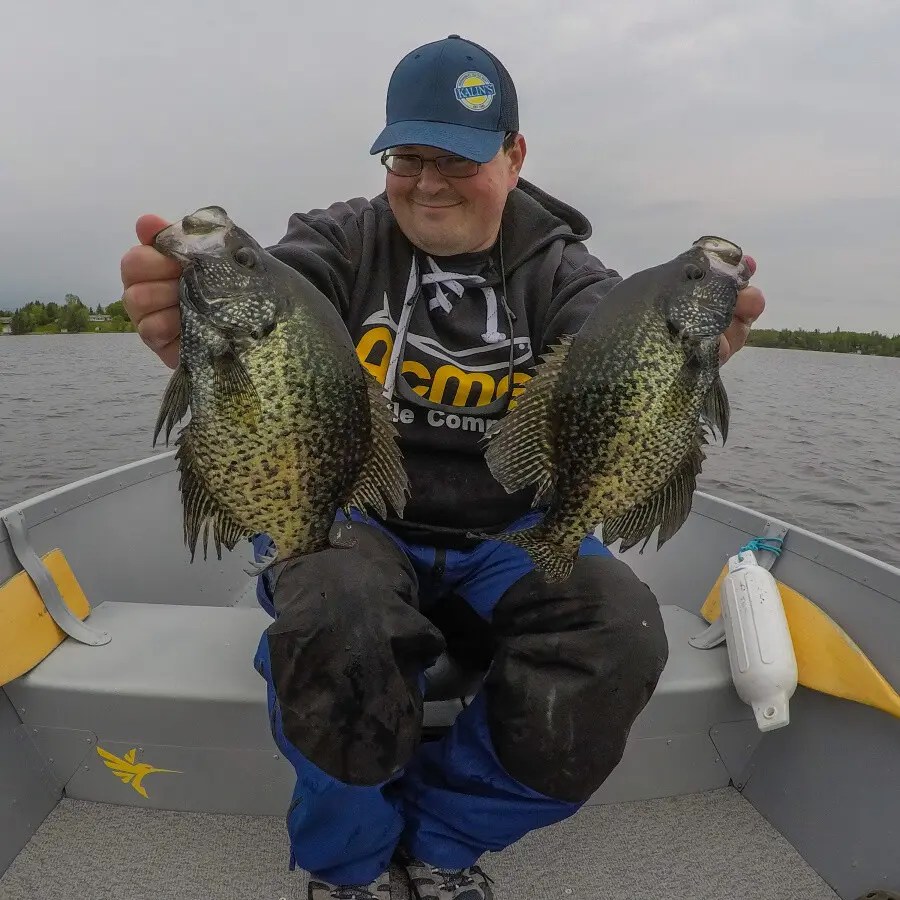 Isolated spots, that are in the 4-5 foot range, with stocky green weeds, have been key to getting bit. Pay attention to your Lakemaster map! Wider than normal contour spacing, with a nice flat, are great areas to start. Stumps and submerged trees are also Crappie magnets. 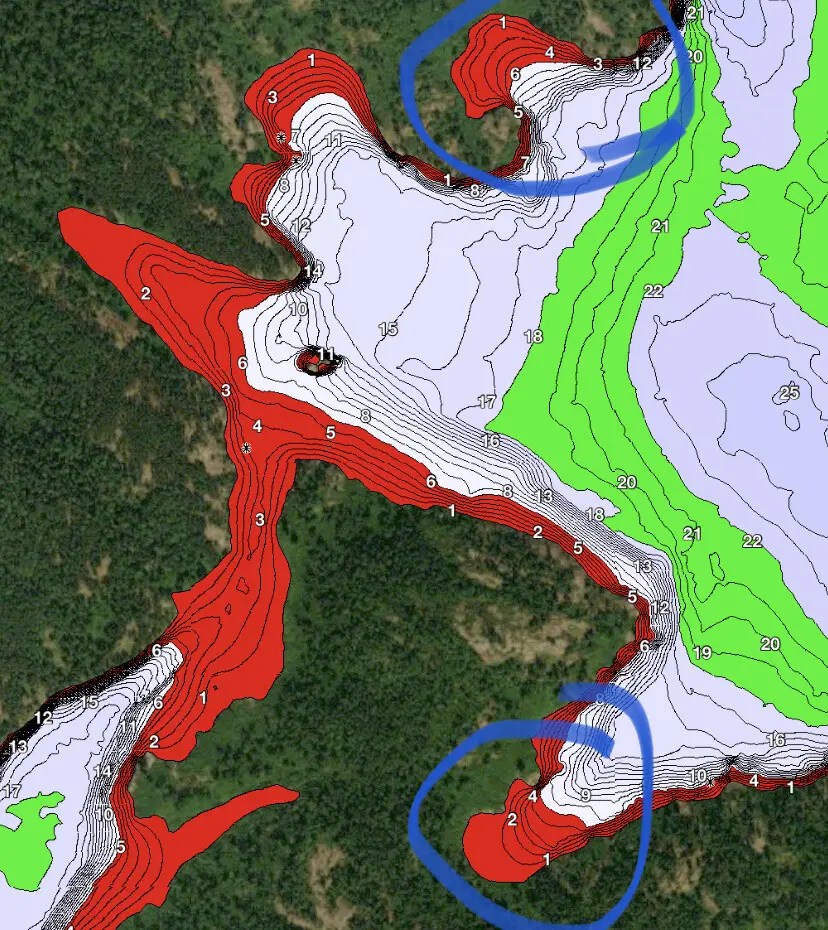 Float fishing for panfish is quite addicting on light rod. I usually run a 1/16oz jig tipped with a 2” Kalin’s Crappie scrub. Small thin bobbers get the nod here, with the bait set 18 – 24” down from the float. If the bite is tough, downsize to a tungsten jig and micro plastic! 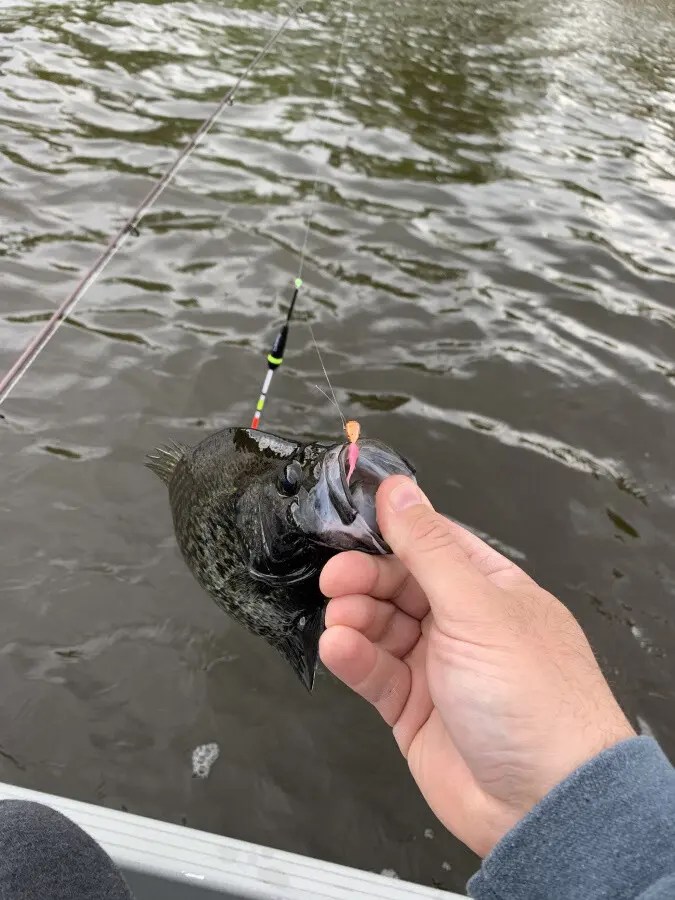 The Whiteshell provincial park has many angling opportunities for Crappies. Get out there, stay safe and take the kids pan fishing!! It’s a great family outing. See you on the water. 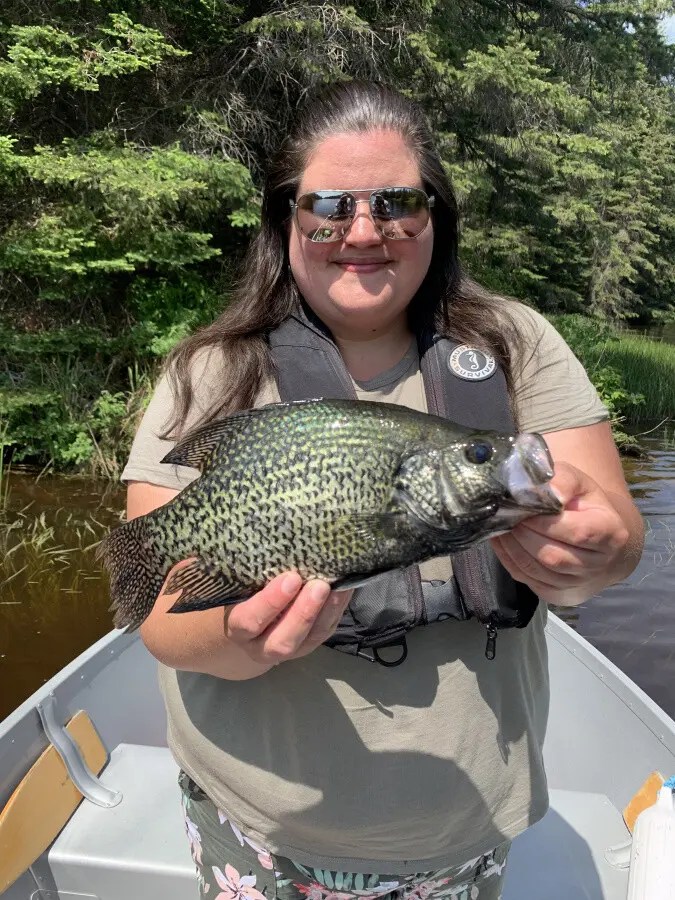 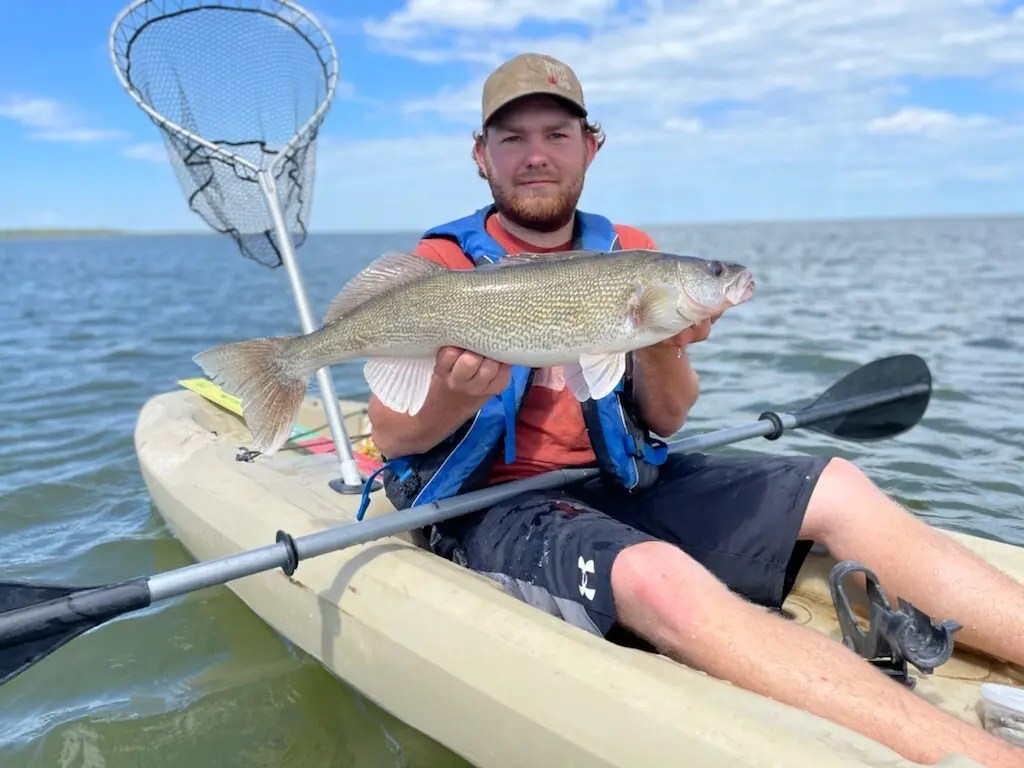 The big lakes remain on fire for walleye and freshwater drum. Friend Jim Price has been catching walleye on Lake Manitoba in two feet of water. Jim says the fish are so shallow the only way they could catch them is long lining spinners so they didn’t spook the fish. On Lake Winnipeg south basin, the drum bite is hotter than a fire cracker with 70 fish days possible in six feet of water using a drift jigging approach. The bite is also great from shore!

LAKE OF THE PRAIRIES

Well of course any kind of meat is working like leeches and frozen minnows but the bigger fish are coming on crankbaits. The hot bait has been a #5  jointed Shad Rap in the purpledesent colour pictured below. 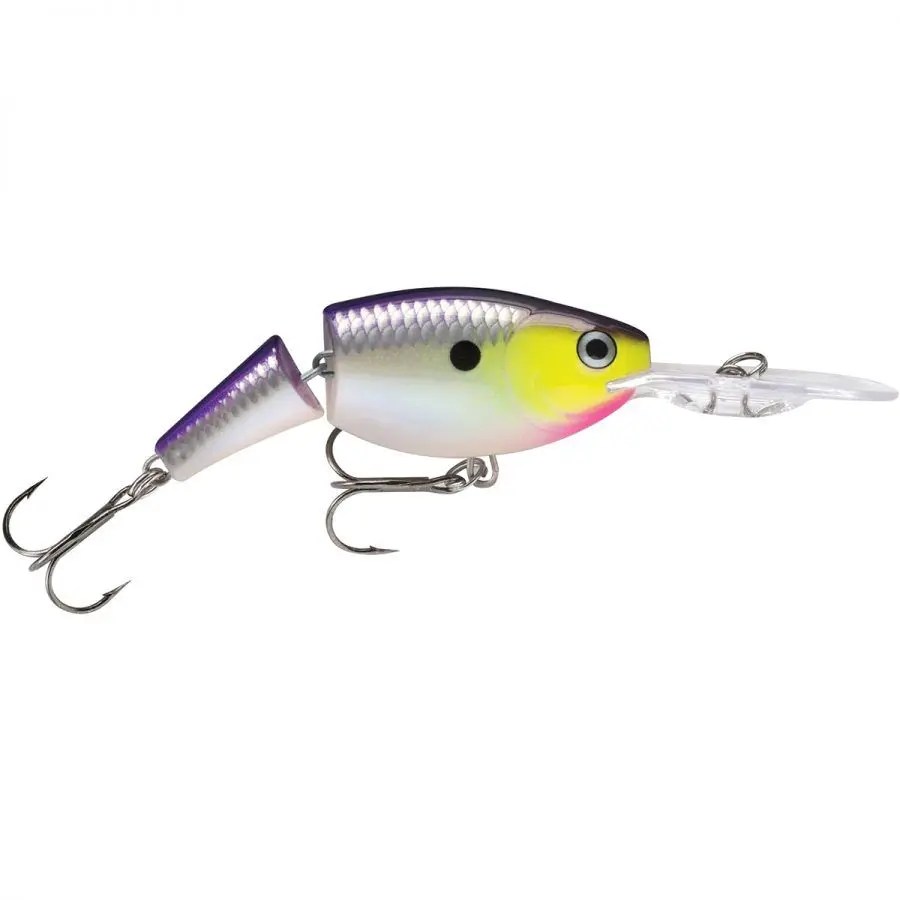 There have been some larger fish caught, some in the 22 to 27 inch range, caught in five to seven feet of water. 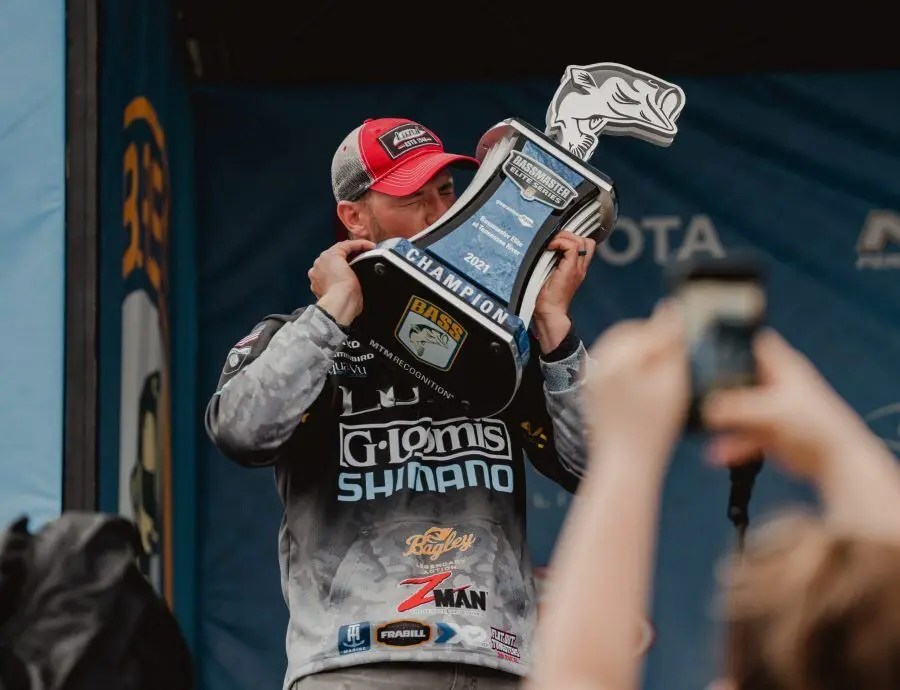 We haven’t had a fishing report from Jeff Gustafson from quite a while. That’s because he has been on the road the last two months chasing the dream. Part of that happens today at the Bassmaster Classic as Day One kicks off. You can watch all the action at bassmaster.com. After the Classic is over, Jeff will be heading back home to Lake of the Woods. Here at Hooked we want to wish him all the best.  Get em Gussy!

Meantime Youtuber and friend Jay Siemens has been putting in the work supporting the lodges in the area. Check out his latest adventure to Manitou Weather Station Lodge. Jay gets after it once again!

Summer is in full swing here in Northwestern Ontario, and fishing opportunities are everywhere.  I haven’t been out as much as I’d like, with work commitments and some projects keeping me busy, but we have managed to sneak out a few times, and had a ton of fun fishing with my little girl. She seems to share my excitement and enthusiasm for fishing (I hope this lasts forever!). 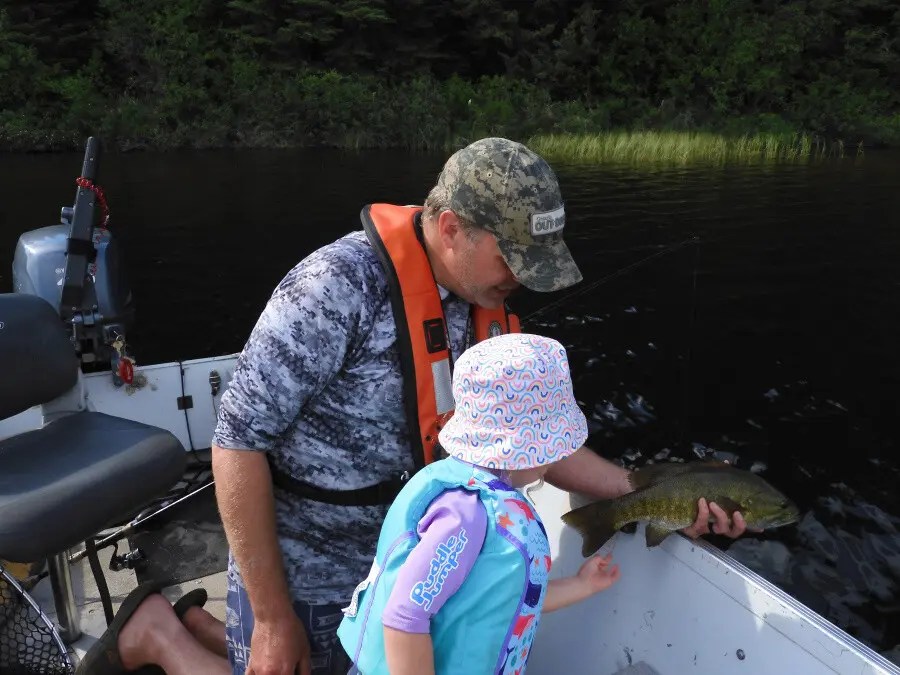 Inland lakes are warming up, and the swimming and fishing has been good. We fished smallmouth last weekend, and had a fun afternoon on the water, and also spent some time on the dock at camp, which was a serious amount of fun.  My daughter is getting the hang of this fishing thing, and she sat, patiently watching her float.  She would then excitedly crank away, and reel in perch after perch.  What an exciting, and proud moment, and we had a ton of fun. Perch seem the ultimate fish for kids, and I’m thrilled that we have the opportunity to catch them at camp.  They are plentiful and willing to bite, and makes for a great fishing intro for my little girl!  She also came along chasing smallmouth, and had some fun helping us catch bass and pike as well. 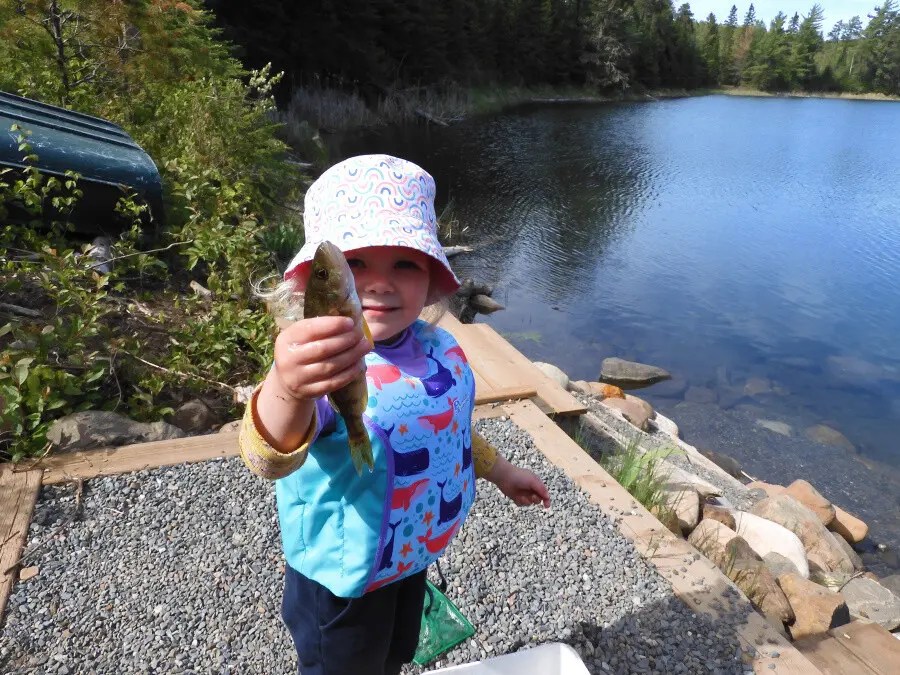 I’m hoping to get out on Superior soon too, exploring some areas close to home, and spend some time chasing trout and salmon.  A friend of mine and his son have been fishing lake trout and salmon lately near home, and things have been heating up.  Around Thunder Bay, there are several different areas of Lake Superior, and they’ve been fishing one section that has already been producing Chinooks, and they’ve had some great days on the water.  With water temps on the big lake getting well into the 50’s, they’ve had some great days this past week. As the lake warms the salmon fishing should heat up as well around Thunder Bay, and in the coming weeks things should only get better. See their latest Superior salmon and lake trout video here:

My wife and I made it up to Kenosee lake what a beautiful little lake. The fishing was awesome. Lots of perch with some great walleyes. Perch ranged in size from 6” to 12” was biggest we caught. You would have 10 or more chasing hooks at a time great place for first time fishers and kids. Also managed three walleyes over 55cm as bonus. Caught all the fish in 6 to 8 feet on jig and leech. Colour of choice was either pink or black. 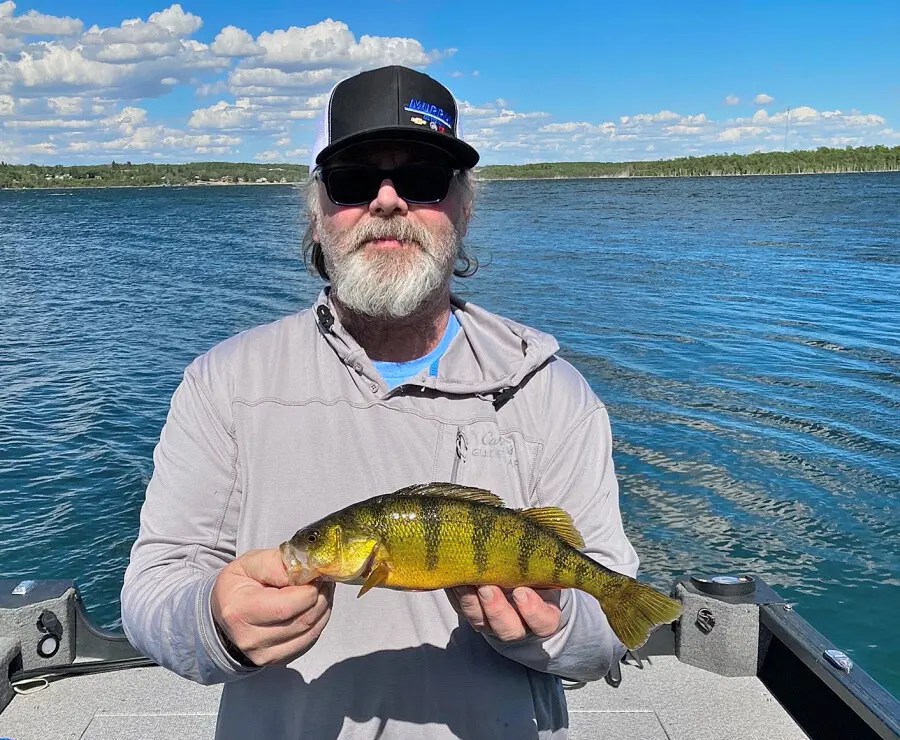 Fishing at the Calling Lakes has really turned on with walleyes of all sizes.  The depth ranges was  12 to15 feet of water. We tried a few different techniques every thing seemed to be working.
Meantime Clayton Schick slid down to Brad’s home water, Boundary Reservoir and laid a licking on some bit largemouth bass! Yes, that’s right, largemouth in Saskatchewan.
https://youtu.be/u-sNhjDMuco

The rig and leech  bite has been good. Lots of overs. Fish still seem to be shallow but up and down the whole lake. I’m thinking that night crawlers should turn on soon. 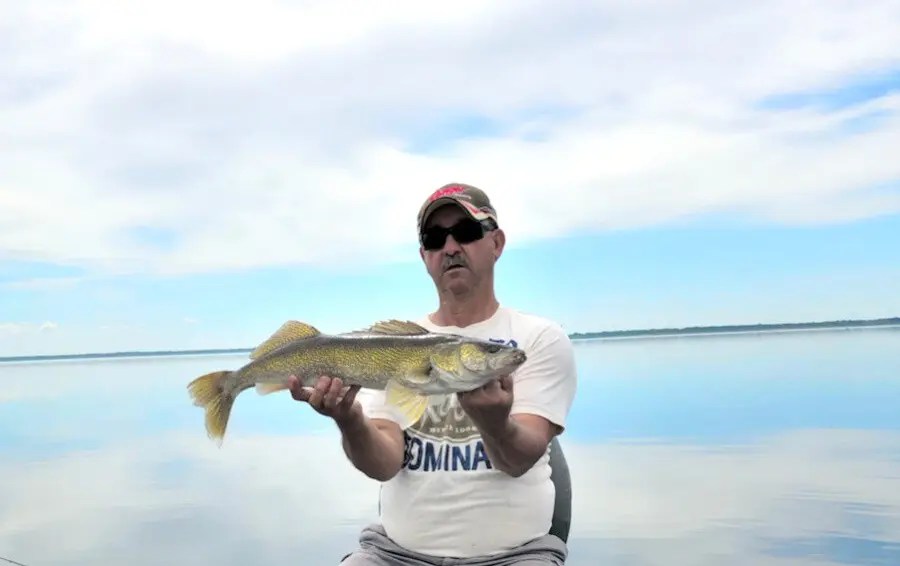 The pike fishing remaining outstanding on the shallow flats on the eastern section of the reservoir. Now the walleye have joined in. Friend Russ Heatherington was out this past week, catching a mix of walleye and pike in six feet of water. Fish were caught on a wide variety of baits including spoons and swimbaits. Water quality remains outstanding. 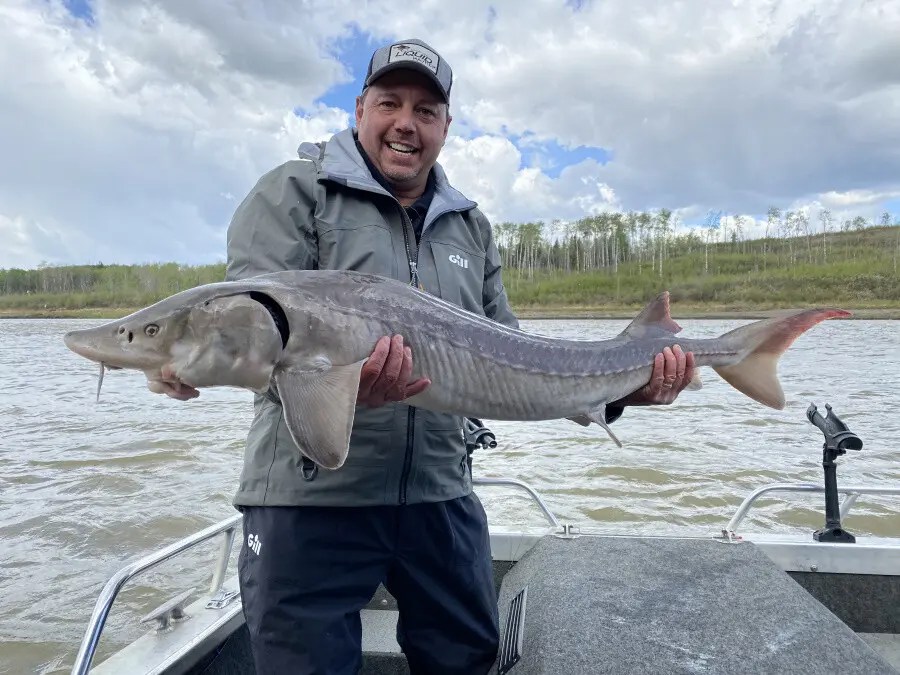 The North Saskatchewan and South Saskatchewan Rivers are fishing very well for lake sturgeon. I spent a couple of days fishing both river systems. The current in the areas you plan to fish will determine the weight you will need to use on your three-way swivel. The most common used was a 4oz and 8oz depending on current conditions. You want to use as little weight as you can get away with so there is very little resistance when a sturgeon picks up your bait. 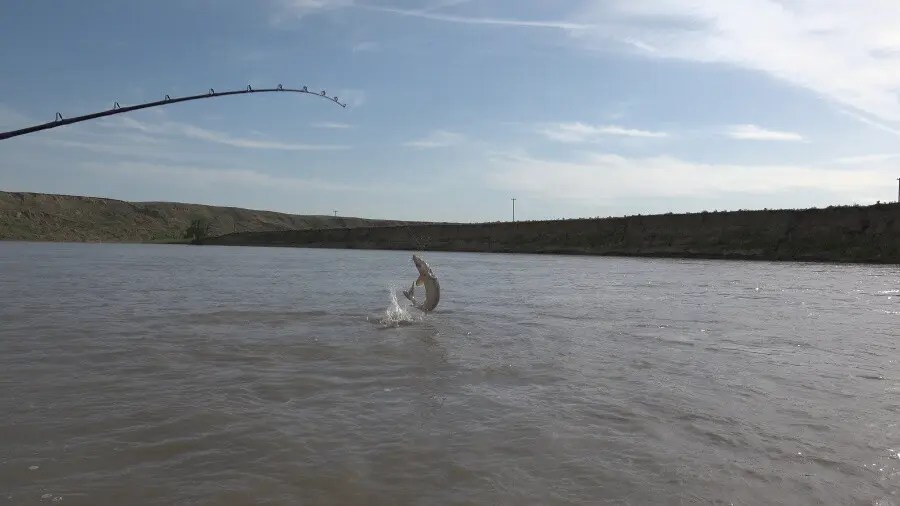 A 3/0 Gamakasu hook tipped with as many nightcrawlers as you can hook and ball up on the hook smeared with Liquid Mayhem to produce a stronger scent trail in the stained river water has been the most productive presentation on both the North and South Saskatchewan Rivers systems. Both river systems have extremely stained water and due to the run-off in the mountains, water levels and conditions are changing daily. Please practice catch and release and thoroughly read the 2021 Alberta Sport Fishing Regulations before you cast a line. Lake sturgeon are a protected species throughout Canada and regulations may vary in the areas you’re fishing. 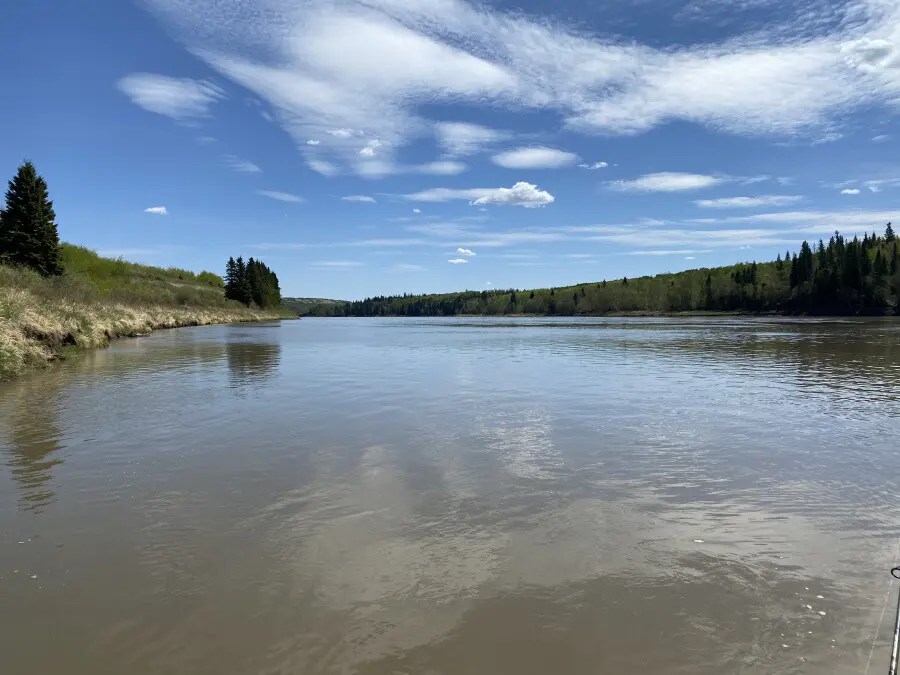