The management of the Lake Winnipeg fishery requires fishery managers have a good understanding of the number of walleye and other fish species being caught and harvested by anglers. Three creel censuses involving the Lake Winnipeg fishery have been conducted in the past decade that support such an understanding. These include a joint federal/provincial recall survey in 2010, part of a large national survey. Then a Manitoba-led on-lake creel census in winter 2017/2018 and an angler-funded recall survey of catch in 2017. 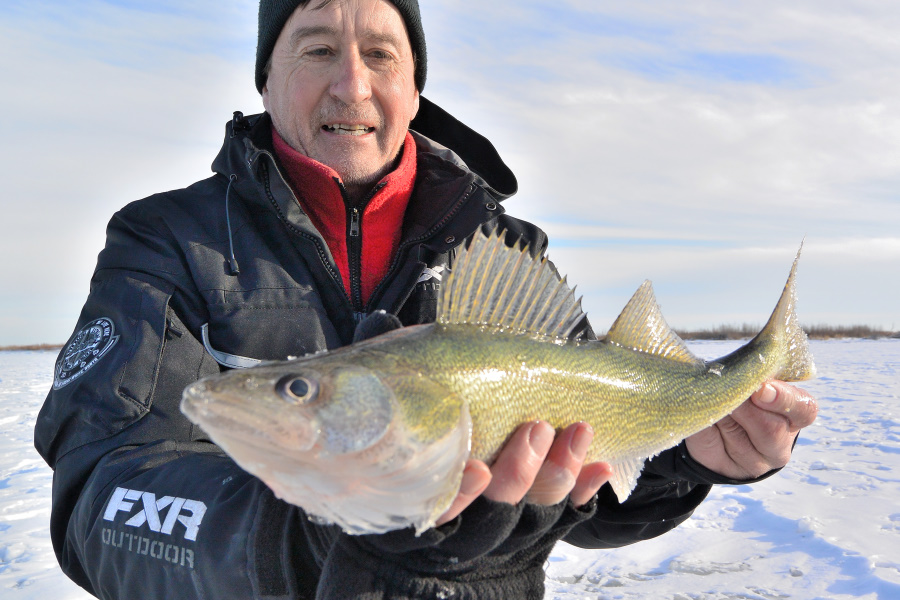 During interviews of more than 6,300 anglers, both anglers and vehicles were enumerated and anglers were asked, at the end of their fishing day, to provide their total and retained catch, by species, their home community and the number of hours they had fished.

The following is a partial summary of the collected data.

In the winter of 2018/2019, an estimated 70,000 angler days of fishing effort occurred on the south basin of Lake Winnipeg. American anglers came to fish Lake Winnipeg from 12 US states with 90% originating from Minnesota, North Dakota and South Dakota. 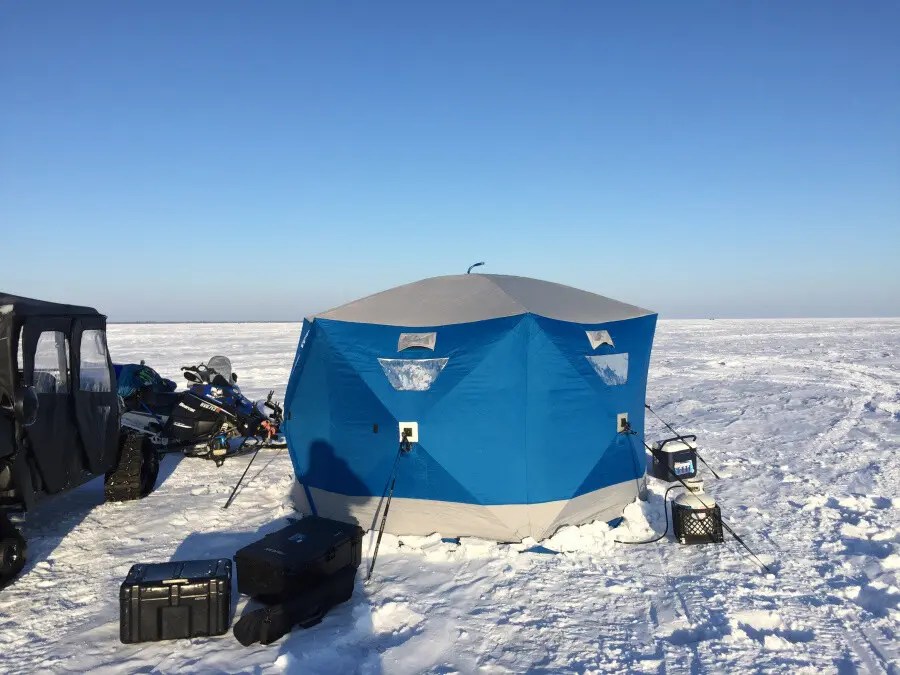 Anglers caught an estimated 143,000 fish of all species combined, 95% of which were walleye, 2.6% Sauger and 1.4% Northern Pike. An estimated 81,500 fish were retained. Factoring in 10% catch and release related mortality for released fish, which is biased high considering the cold winter water temperatures and shallow depths at which Lake Winnipeg fish were caught, the total estimated kill of fish was 87,500, or about 87,500 kgs assuming a one kg average weight.

The estimated retention is the lowest observed among recent creel censuses. This may have been in part the result of more difficult lake access in 2018/2019. While the south basin was accessible to even small 2WD vehicles for much of winter 2017/2018, more challenging snow and pressure ridge conditions resulted in periods of no or limited access in winter 2018/2019. 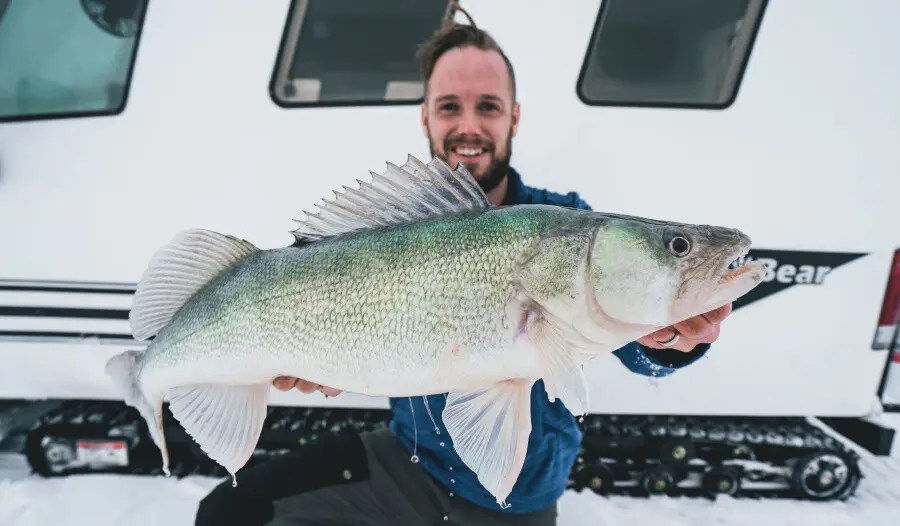 Angler catch per unit effort (CUE) increased each month from January through March. Combined with the milder weather of late winter, these are clear proximate causes of what is locally known as “March Madness”.  Anglers from all points of origin made more fishing trips to Lake Winnipeg beginning in mid-February and running through to the end of the fishing season. The Louis Riel Day long weekend, which is also the winter family fishing weekend when angling licenses are not required, is clearly evident in the vehicle counter data as three consecutive days of high vehicle counts and served as the kick-off point for the increased fishing intensity of late winter weekends.

Perhaps some of the more interesting insights obtained from the creel census are related to differences between American and Manitoban anglers. These comparisons are made using data from Balsam Harbor, Pruden Creek, Warner Road and Riverton access points. The timing of angler traffic on and off the lake varied by access point, in apparent relation to the proportion of American anglers using the access. 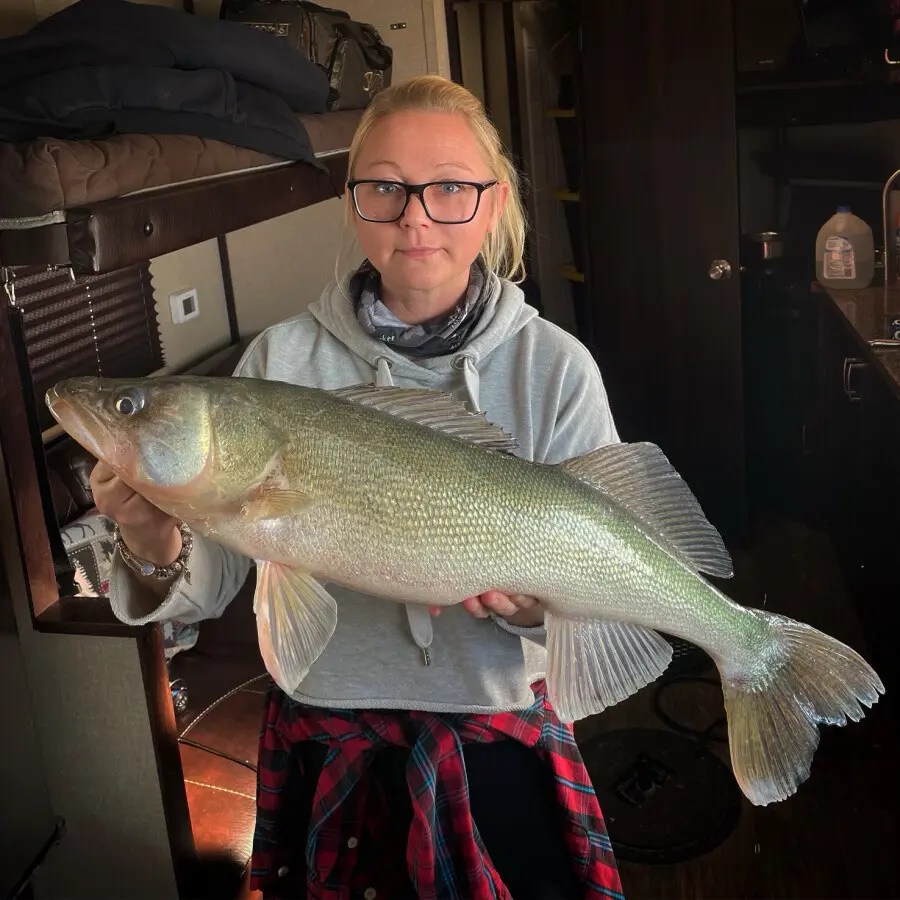 Where the number of Americans was a larger proportion of the total number of anglers, more vehicles accessed the lake earlier in the morning, during nautical and civil twilight, than in areas with predominantly Manitoban anglers.  A comparison of Pruden Creek vehicle counts, which access point had the highest proportion of American anglers, to those of Riverton, which had among the lowest, shows this difference.

Americans fished in the largest groups, with an average group size of just over three persons, followed by anglers from communities more than 20 km distant from the lake at just under 2.5 persons per group and then local anglers, for which average group size was less than two persons. Increasing group size negatively affected individual CUE, for both American and Manitoba anglers.  This is likely caused by several factors including group self-entertainment (actively socializing anglers concentrate less on their fishing) and group inertia (more work is required to move a large group to a new location if fishing is slow). 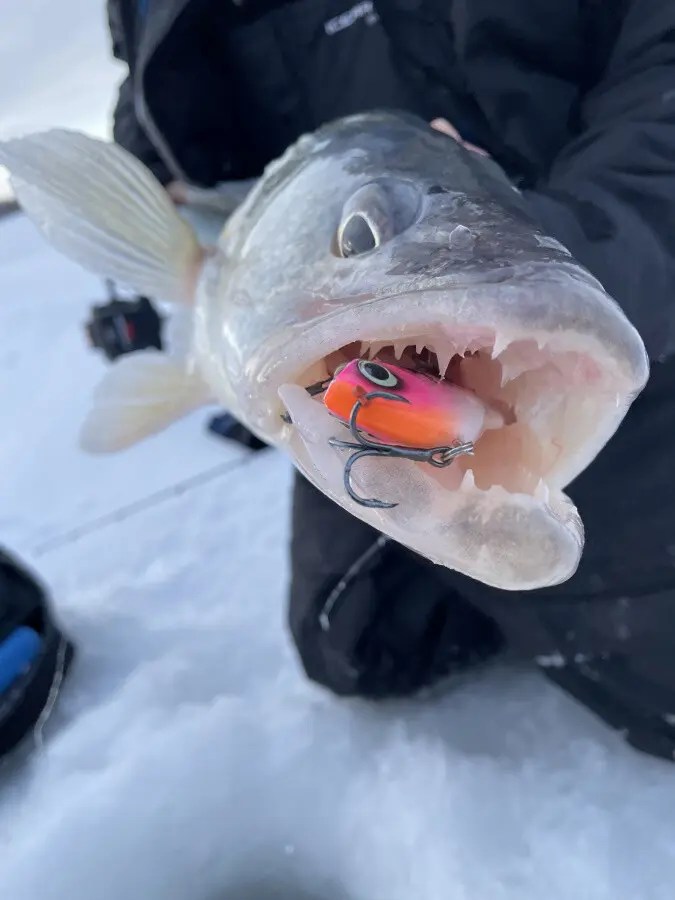 Americans caught more fish per unit effort than Manitobans, regardless of which access point they used, which month they fished or the size of their fishing group.  As would be expected with the combination of higher CUE and fishing more hours per day, Americans had more successful fishing trips than Manitobans. 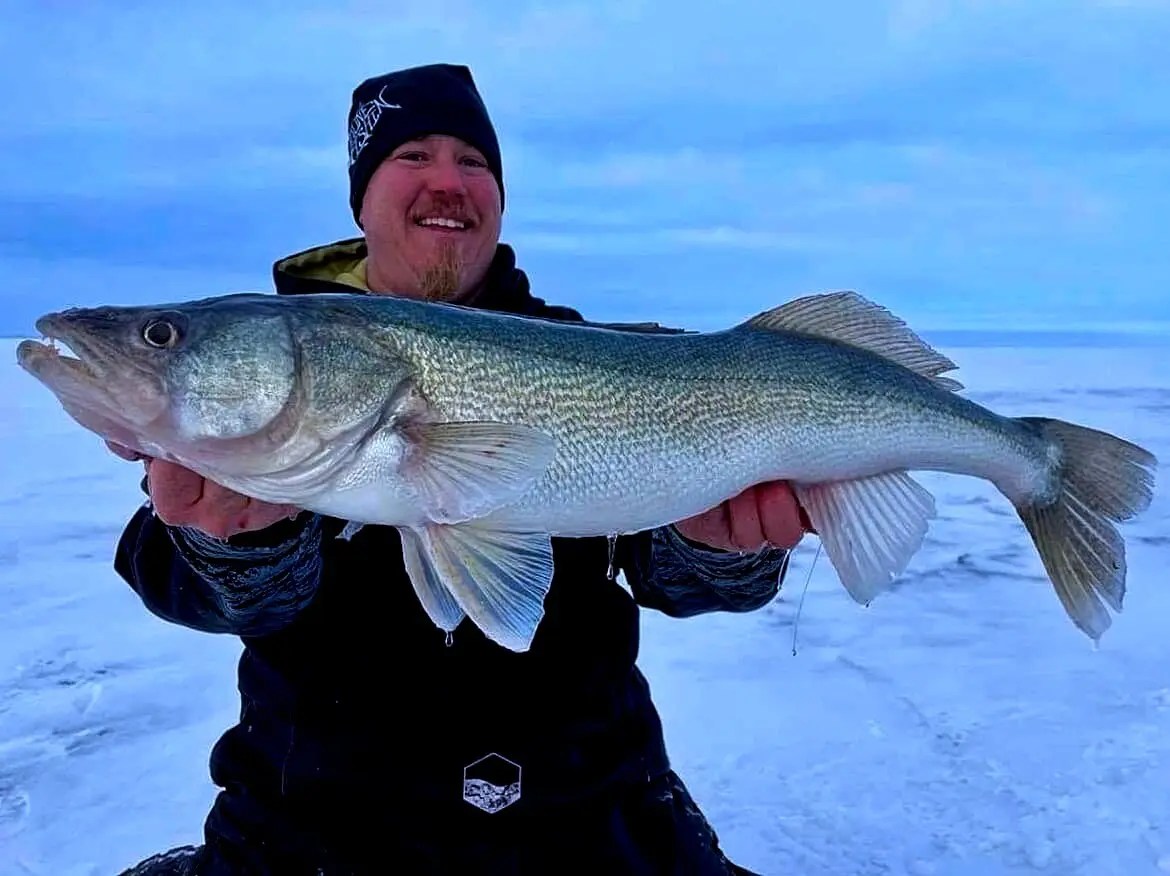 The possibility of catching a trophy walleye in Lake Winnipeg draws many anglers to the lake. That said it was no small task catching one for many! It took considerable effort, on average between 490 (Americans) and 730 hours (Winnipeggers) of fishing to catch a Master Angler walleye in winter 2018/2019.  That winter  an estimated 880 Master Angler walleye were caught (qualifying total length 71 cm or 28 in).

Many of the differences between American and Manitoba anglers likely can be attributed to differences in motivation between the groups of anglers. Americans have limited opportunity to fish Lake Winnipeg compared to Manitobans and chose to maximize their opportunity by arriving on the lake earlier in the day and fishing more hours per day.

The opposite can be observed for anglers from lake-side communities, who presumably enjoyed the greatest opportunity, and fished just over five hours per day.  American anglers likely also included among them a higher proportion of highly skilled trophy walleye hunters, folks who are willing to drive the long distance to Lake Winnipeg and secure local accommodation to take part in the fishery. This might have accounted for the higher CUE for Americans. 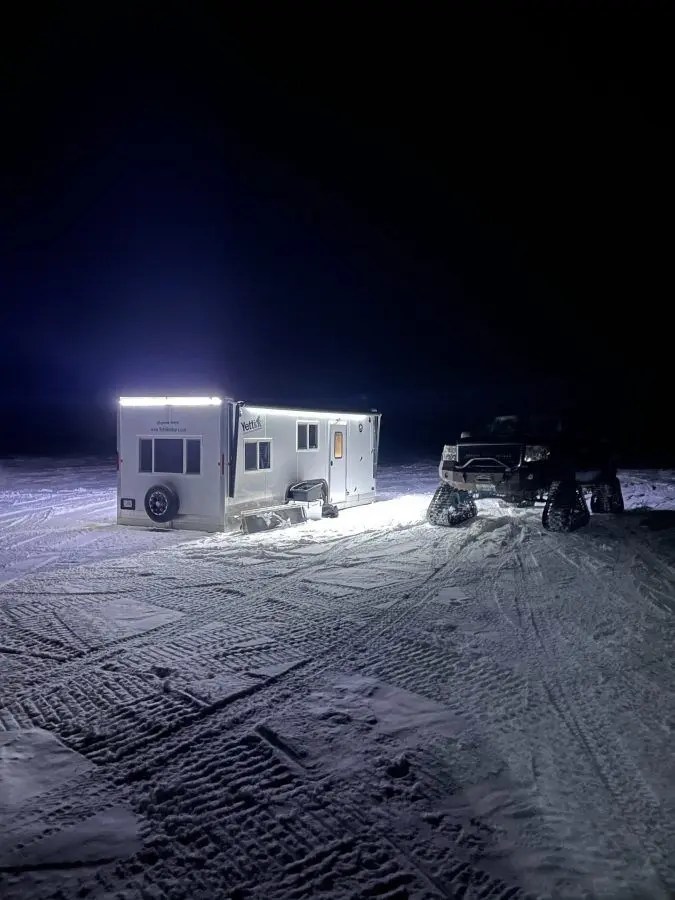 Americans also had somewhat of a mobility advantage: they were more likely to be equipped with a tracked vehicle, which afforded better access to locations off the well-beaten truck tracks used by most Manitobans, especially during a winter with challenging snow and ice conditions.

There are likely to be further surveys to assess angler use of and fish harvest on Lake Winnipeg. The surveys provide important information to fishery managers, fishers, and the tourism sector. When anglers are approached to participate in a survey, whether in-person, through submitting a creel card into a lakeside drop-off box or through a web-based application, please participate and ensure the highest quality information on angling is available to support the management of the fishery.

Working Together to Manage Manitoba Fisheries

Fish Growth, Trophy Fish and the Role of Harvest-Part 3!

How do we Manage our Fisheries- Part Two

Fly Fishing is enjoying new found popularity, especially among those willing to explore. More and more hardcore anglers are searching for the ultimate bite. In Manitoba we have some of the best fly fishing opportunities in the Northern Hemisphere. While they are not your standard trout streams, still water fly fishing is the king. For