Whales, whales everywhere! That had been the theme of a four day salmon fishing trip to the west coast. But nothing in the previous three and half days prepared us for what we were about to witness. We were making one last trolling pass on the east side of Coho point, when something grabbed my attention off the port bow. 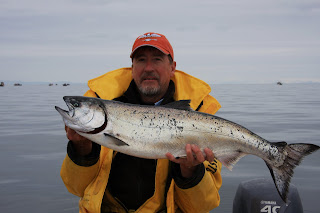 In the distance, amongst a group of boats, I could see a huge fluke slapping the water. John Toone, my partner on this salmon fishing trip to the west coast, turned around in the boat to get a better view. “Probably a killer whale feeding on salmon” he exclaimed. Pulling in our two fishing lines we slowly motored closer. The scene before us was a once in a lifetime experience, a spectacle that made the hair on the back of my neck standup. A massive killer whale had its jaws into the side of a humpback whale twice its size. As this drama unfolded in front of us, the group of fishing boats clustered around Coho Point off Langara Island moved to get out of the way of this fierce fight for survival. One of the fishmasters from Oak Bay Marine group stayed a short distance away, making sure to warn anglers to move out of the area of the battle. In the twenty minutes we were able to watch, the two whales would dip below the surface of the ocean only to resurface five minutes later a fair distance away, the humpbacks fluke or pectoral fin slapping once more in a desperate attempt to shake its attacker. We never did see the final outcome as we had to return to our home base, the MV Marabell for the trip back to Winnipeg. 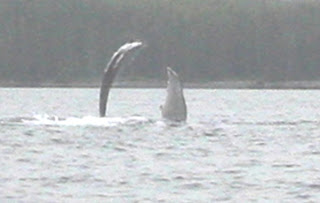 What a trip it was! Four days earlier we had flown to Vancouver, then hopped on a charter flight from Vancouver south terminal to Sandspit on the northern end of the Queen Charlotte Islands. Along on the flight were a group of anglers headed to three different Oak Bay resorts in northern British Columbia. One group was going on to the Salmon Seeker floating lodge on the west side of the island. We boarded a Twin Otter float plane for the half hour ride to the MV Charlotte Princess and the MV Marabell(our destination) . These two refurbished boats were anchored side by side in the channel between Queen Charlotte Island and Langarra Island, the gateway to some of the most spectacular scenery and salmon fishing in the world! I had been up to this part of the world about ten years ago and when an invitation was extended to make another visit, I quickly accepted. I have been to a number of the Oak Bay resorts over the years and have always been impressed with their service. This trip was not to be any different, though the fishing was a little slower than my last visit. Part of the problem could have been the pods of killer whales that continued to move through the area. 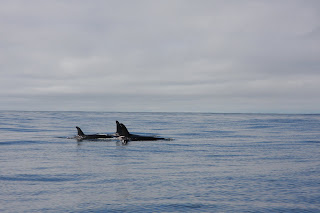 Attracted not only by the amazing amount of marine life, the presence of a number of humpback whales that were feeding along the rocky shorelines of Langarra was probably a factor as well. In fact, two days previous in Explorer Bay on the east side of the island, we had a huge humpback dive right under our seventeen foot fishing boat and out the other side. For a couple of prairie lads it was a little bit disconcerting. Still that wasn’t nearly the adrenaline rush that occurred later the same day. I had just landed a twelve pound coho salmon and was holding it up for a picture, when a killer whale surfaced right beside our boat. Wow! Both John and myself jumped about two feet in the air, the camera not quite ready to capture the moment but that moment will not be forgotten.
Yes, we did have some excellent salmon fishing with mostly cohos landed along with a few Chinook. When the weather finally settled down on day three of our trip, we were able to drive our boat around Langarra Island, checking out the sites along the way.
Our first stop was a sea lion haven, on which these huge animals lounged in the sun. Atop the rocky atoll, a bald eagle perched, ever watchful for scraps. Out front anglers were catching red snapper off a rocky reef. We headed out a little deeper to try for some other bottom fish which were extremely abundant. These included loads of halibut, mostly in the five to ten kilogram range.
As we drifted along, another pod of killer whales cruised by on the glassy ocean, Alaska a backdrop in the distance. A short boat drive later we stopped to view the Langarra Island lighthouse perched atop a cliff on the northwest corner of this desolate island. In the distance, we could see a fleet of trawlers out in the large ocean swells. Then it was back south past another group of anglers fishing for larger halibut a kilometre out in the ocean. You see, it’s not just the great fishing that brings me back to this part of the world. To see whales first hand a personal is pretty special, never mind the battle between a killer and humpback whale, just a once in a lifetime experience. 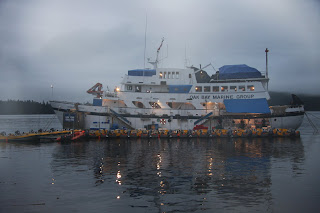 For information on the resorts owned by Oak Bay, visit their website at http://www.obmg.com/.A trip of a lifetime is probably more affordable than you think.

Lake of the Prairies Walleye

It was the adventure of a lifetime by two young anglers that wouldn’t be stopped. Petro Hrynda and Nolan Plew had been planning for four years to head to Snail Lake for Artic Char. Despite a myriad of issues these two hardcore fishermen made it into the trip of a lifetime. You can read all